skip to main | skip to sidebar

Evolution of the sketchbox icon

Sketchbox from omz:software is a nice freeware tool for the Mac. It can be used for sketching on stickies which can be collected in a main window.

I worked closely together with Ole Zorn from omz:software and reworked the Application icon.

The prior sketchbox icon was a nice idea i really liked and i want to leave the idea of the icon and don´t want to change the whole grafics. So i decided just to give it a mor emodern and more MAc os X like touch.

For the final version of the icon it was very important to have it vectorized to have it in higher resolutions since leopard can have icons up to 512 x 512 px.

And it was very important that the icon is not to detailed for having it scaling down. So it should work in high and low resolution.

I rebuilt the whole icon using Adobe Illustrator. I gave it some transperency effects to have lhave it fit better with Mac OS X

Ole Zorn wanted to have the little snake on the front sticky in the new icon. So i rebuilt it to and redesigned it to have a smother look. 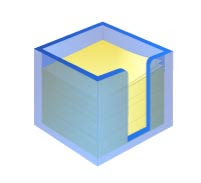 After that i just thought that it doesn´t look very promising so i came up with the idea of having 4 colores of stickies in the box.

This is the final version of the icon:) Hope you all like it;) I also decided to rework most of the application icons to have a more modern look of the interface.

After that i had a much clearer looking interface. I reworked all the blackish icons to match muchb etter with the sticky color.

And finally i redesigned the tool cursor icons for giving them a better 3D look. Check out the new pencil icon which has the color you choose:)

BTW: You can now donate to Ole Zorn for using sketchbox. So if you like it and use it a lot…

Posted by Dietmar Kerschner at 6:49 AM